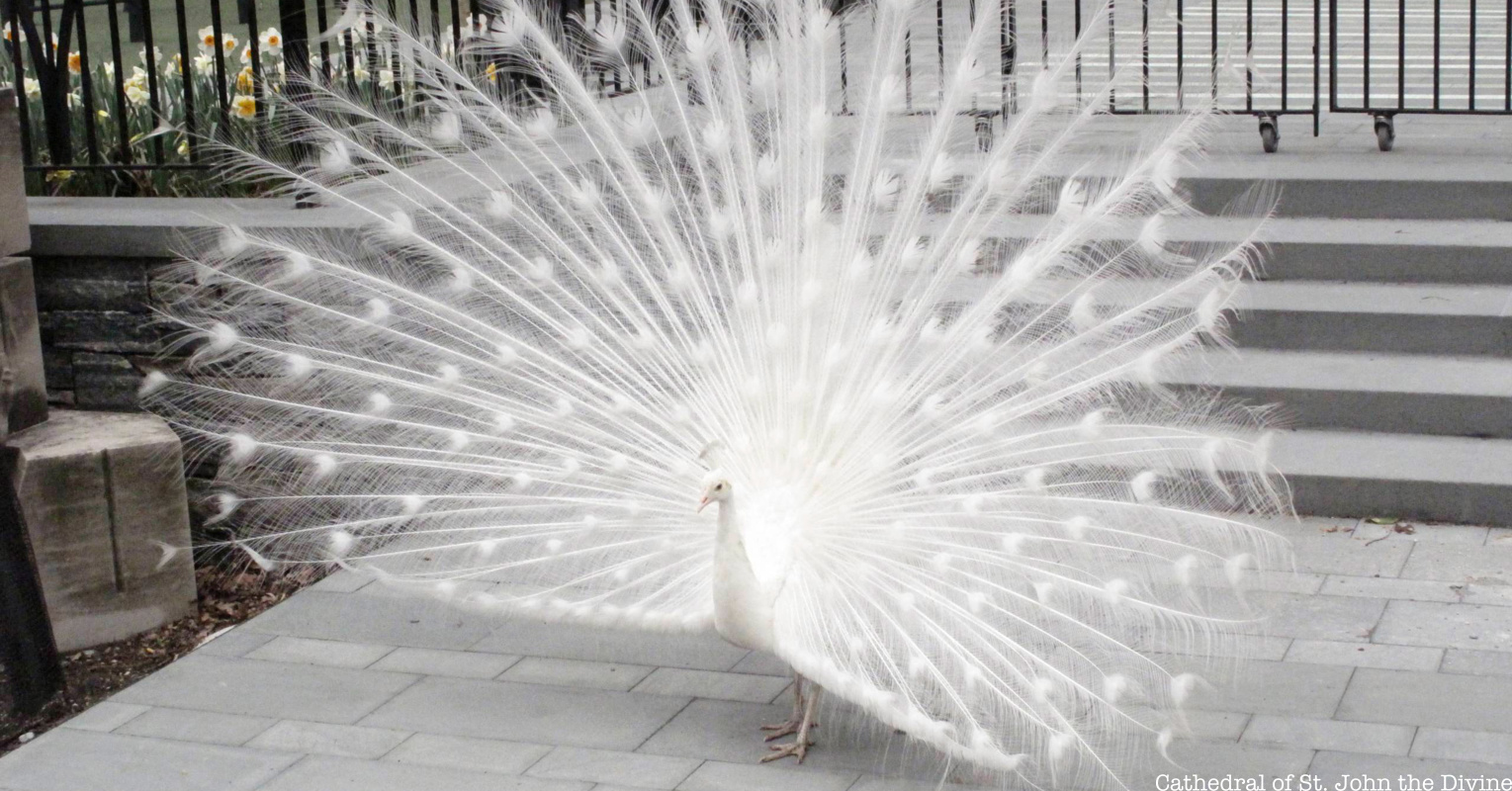 Since 1972, there has been a resident flock of peacocks at The Cathedral of St. John the Divine, but this weekend, the trio of birds who have lived at the cathedral for over 20 years will head to a new home. Resident peacocks Jim, Harry, and Phil, will be spending their retirement at Animal Nation, an animal sanctuary in South Salem, New York. You can bid farewell to the peacocks of St. John the Divine at a family-friendly carnival on Saturday, January 21st.

Jim, Harry, and Phil were gifted to the Cathedral by students of The Cathedral School. For the past twenty years, the birds have had free reign of the 13 acre Cathedral Close and they even used to venture over to Morning Side Heights Park when they were younger. They feasted on almonds and kale and are named after two of the Cathedral’s previous deans and a former head of The Cathedral School: Dean Pritchett (Harry), Dean Kowlaski (Jim), and Phillip Foote (Phil). Their upbringing was aided by the experts at the Center for Avian and Exotic Medicine.

The peacocks lived in a custom-designed hutch built in 2017. The hutch was designed by Ryan Lewandowski and Paul Scrugha, winners of a design competition by Ennead Architects, and meant to compliment the gothic architecture of the cathedral. The new hutch was blessed in an outdoor ceremony by The Right Reverend Andrew Dietsche, Bishop of the Episcopal Diocese of New York.

While the peacocks have lived long, peaceful lives on the grounds, they have begun to deal with various health ailments as they approach old age. In order for them to get the care they need, they will be moved from the Cathedral to Animal Nation, a 100% volunteer-run wild, farm, and domestic animal rescue facility and adoption center. The mission of Animal Nation is “to eliminate cruelty to animals while spreading compassion into the hearts of all beings.”

Saturday’s festival, hosted by the Cathedral, The Cathedral School, and Advancing the Community of Tomorrow (ACT), will serve as a retirement party for the peacocks of St. John the Divine. The carnival will include activities for the whole family such as art workshops, face painting, storytelling, and costume contests. Festivities will run from 12PM to 4PM. At 4PM, there will be a special farewell ceremony for Jim, Harry, and Phil. Though no plans have been confirmed just yet, there is talk of possibly introducing a new flock of peacocks to the cathedral grounds in the future.

Next, check out The 15 Most Famous Animals of NYC