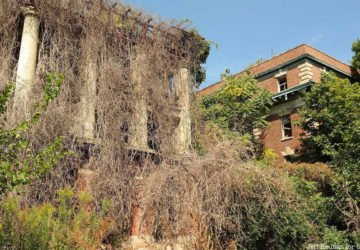 Secrets of NYC
Here are Untapped New York's favorite abandoned places in New York City's five boroughs. Some are break-in-able, some open to the public, some only for the intrepid.
Michelle Young March 3, 2022 Arts & CultureNew YorkNewsSecrets of NYC
Tucked between an industrial stretch of Arthur Kill Road and the Staten Island boat graveyard is an abandoned (but landmarked) cemetery, with gravestones dating back to 1751.
Michelle Young August 28, 2019 ArchitectureNew YorkNews
As a preview for Freshkills Park's much anticipated opening, we've rounded up 10 fun facts about the green space, dealing with infrastructure, 9/11 and more.
Untapped New York April 13, 2018 ArchitectureNew YorkNews
NYC is no stranger to abandoned sites, and Staten Island is full of them. Here are ten of the borough's abandoned places from a boat graveyard to a hospital.
Marc Rich October 11, 2017 Arts & CultureGuidesNew YorkNews
There are some things that NYC can only claim to have "one" of. From homes to sports arenas, here are 10 things that stand alone or are the last of their kind.
erikastark July 28, 2017
Arts & CultureNew YorkNews
Vaults, a synth pop trio from London shoots a music video in the post-apocalyptic landscape of the Staten Island Boat Graveyard, a marine scrap yard in NYC.
Michelle Young March 10, 2015 ArchitectureFeaturedGuidesNew York
Our most popular list on Foursquare is our Abandoned NYC list. Some places are break-in-able, some open to the public, some only for the intrepid.
Michelle Young January 28, 2014 ArchitectureNew York
Perhaps you’ve heard of an elephant graveyard, but how about a boat graveyard? Does such a thing exist? Turns out it does, and New York City has one. Known as the Witte Marine Scrap Yard, the Arthur Kill Boat Yard, or simply the “Staten Island Boat Graveyard,” the city’s only remaining commercial marine salvage yard is located in Rossville, Staten Island.
Untapped New York January 11, 2011