The Chelsea Market Skybridge originally connected the Nabisco factory and its neighboring office building. Now the skybridge serves two private office spaces and is not accessible to the public but you can see this skybridge easily from The High Line. Until 2016, the High Line’s longest running art installation was located just below it – The River That Flows Both Ways by Spencer Finch, the same artist that installed a miniature redwood forest in Downtown Brooklyn. Philadelphia artist, Stephen Powers, who also goes by the street name ESPO, painted this street art installation on the skybridges of an old Macy’s garage on Hoyt Street. Entitled “Love Letter to Brooklyn,” the painted phrases are inspired by conversations the artist and his team had with people passing by, referencing Brooklyn as home, such as “Born Busy as Brooklyn Bound B” and “I am made to leave, I am made to return.” In 2016, it was announced that these sky bridges and the art would be demolished for a redevelopment. Bloomingdale’s rents their skybridge from the city of New York and must pay rent annually. They are not allowed to demolish the structure but must upkeep and renovate it according to its physical needs. This skybridge connects Bloomingdales shopping center to its business offices across the street. This skybridge is accesible to the public through the Bloomingdales entrance on the third floor. 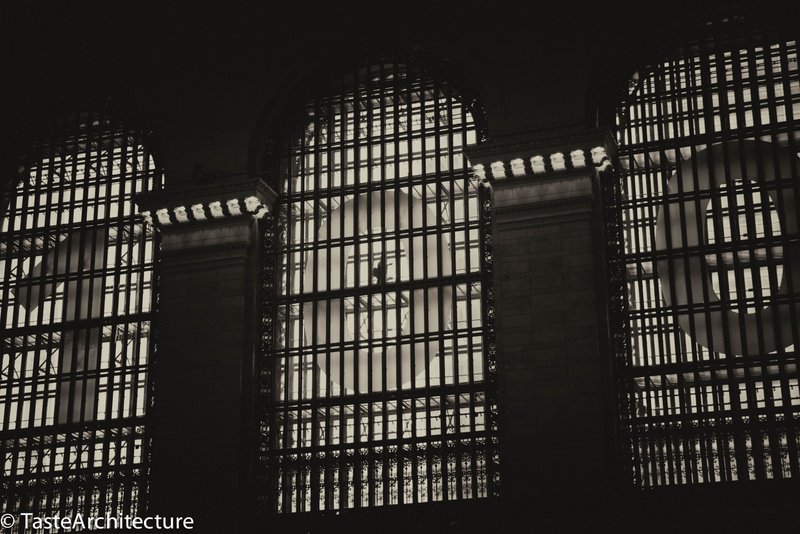 Grand Central Terminal captures the essence of the King’s View of the city of New York. Entering Grand Central Terminal is like entering a microcosm of the city. Underpasses, overpasses and escalated roads wrap around the building like vines on a tree. Inside the terminal windows are glass walkways that connect between the terminal and the buildings around it, holding true to the over-overarching message of the King’s View, which envisioned a city with multi-modal transportation snaking through the interior and exterior of the city’s infrastructural skeleton.

Check out what the inside of the walkways look like and the view of the main atrium. East of Madison Square Park is this walkway connecting the Metropolitan Life North Building (11 Madison Avenue) to the Met Life Tower. The Tower, modeled after St. Mark’s Campanile in Venice, Italy, was the world headquarters of the company until 2005. The North Building served as the records warehouse for the company. Now, both buildings are occupied by Credit Suisse, although the upper floors of the tower is in the process of being converted into the New York Edition Hotel. In 2015, 11 Madison Avenue was sold for $2.29 billion, the second largest real estate deal for an office building in the United States. Between October and November 2020, this sky bridge was demolished. Between Trinity Church and US Realty buildings on Broadway downtown is this delicate sky bridge linking the two tall skyscrapers. The construction of these tall buildings was such a feat, one street had to be permanently moved and one disappeared all together. Hunter College is located on 68th and Lexington and has a series of sky bridges engineered by John Shmerykowky. These sky bridges connect the West, East and North buildings on the third and seventh floor. These relatively new additions allow students to travel to each building without having to leave campus.  If you are not a CUNY (City University of New York) student you can gain access by acquiring a visitors pass from Hunter College.

There are just a sampling of the rich architectural variety that sky bridges come in. Next time you’re walking around New York City, don’t forget to look up!