This is a guest post from Untapped correspondent, Janet Kim, designer and proprietor of the New York City-based contemporary clothing line Graey. While I had asked her to cover her experience at a free surf lesson with Skudin Surf, I also want to mention that Graey will be showcasing at New York Fashion Week again on September 9th, after a well-reviewed collection last year (including coverage in WWD-Women’s Wear Daily).

The surfing  Meetup group that our friend Stefan runs was getting  Skudin Surf to give a free surf lesson to newbie surfers at Long Beach, Long Island. I was a little nervous about going by myself but I finally RSVP’ed. Luckily I was one of the 20 (out of 72) that made the cut for the lesson, so last Saturday, I headed to Long Beach.

I convinced my friend Kellan to go, and we took the 9:45 am train from Penn Station. If you go to the ticket window, you can buy a discounted joint beach/rail pass for $19. The surf lesson wasn’t until the afternoon but I figured I’d enjoy the beach since I was heading out there.

The trip is about an hour long, and once we got off, we bought some stuff at the Rite Aid on the way to the beach. When you get to the beach, they take the paper beach pass you get at Penn Station and trade it for a plastic one and punch a hole in it for the appropriate day.

Kellan and I hung out on the beach, going into the water once. I would have gone in more but it was “only” in the low 80s that day (it’s been quite hot in New York over the past month or so), so the water felt a little cool. While we were at the beach, Kellan spotted dolphins near the horizon. She got really excited, but I was more concerned with what bit my foot when I was in the water. It turned out to be a crab. I must have gotten bitten by crabs about 5 times while I was at Long Beach — no one ever told me about this hazard. It was actually pretty painful and I ended up having to go to the lifeguard to get a bandaid for one of the cuts under my big toe.

Kellan playing with her portable speakers

Janet enjoying the beach (not posed at all)

At around 2pm, Kellan headed back to the city and I headed down the beach towards Lincoln Blvd for the surf lesson after changing from my bikini into a one-piece. I wasn’t about to lose my top or bottom during surfing! I found this black tent which is the headquarters for Skudin Surf, run by the Skudin brothers.

In addition to giving lessons, they also do board rentals. And stand-up paddling.

As I waited for my lesson, I snapped a shot of another group lesson already in progress:

Some of their surfboards (the old looking photos were taken with the ToyCamera app on my iPhone):

At the tent, we were met by Chris, one of the Meetup organizers, and we started filling out waivers and getting to know each other. Stefan showed up soon after (he had been preparing for the fun house party that would follow the lesson). They distributed rash guards to those of us who didn’t have one.

Then, the lesson started. Will, one of the Skudin brothers, made us stand in front of the boards on the sand, and we practiced laying on the boards and then popping up. Will and the other instructors critiqued us, instructing us to stay in line with the spine of the board.

Once the land lesson was done, Will divided us by gender, and the girls got to go into the water first. Stefan managed to take a decent amount of photos, including the ones of me on my board: 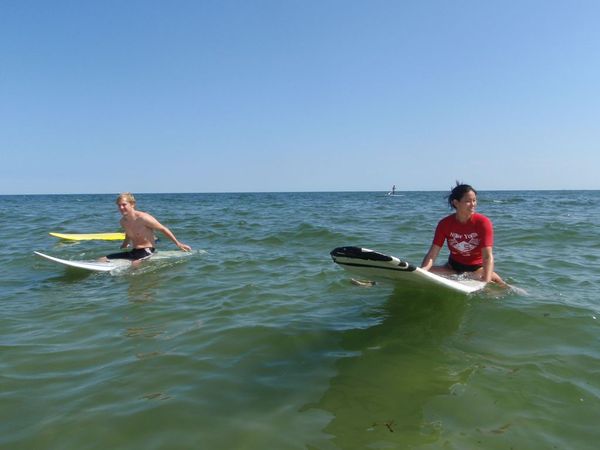 I got a very long foam board, which was great for getting up on. We got into the water and waited our turn until one of the instructors would grab the board and watch for the waves. My instructor was Ryan. When the wave was coming, he would instruct me when to start paddling, and give me a push. Once the board started gathering momentum, he would shout to stand up. The first couple of times I kept falling over, mainly because I wasn’t balanced along the center. However, eventually I was able to get up a few times. It was so much fun, and the water temperature was perfect for surfing. 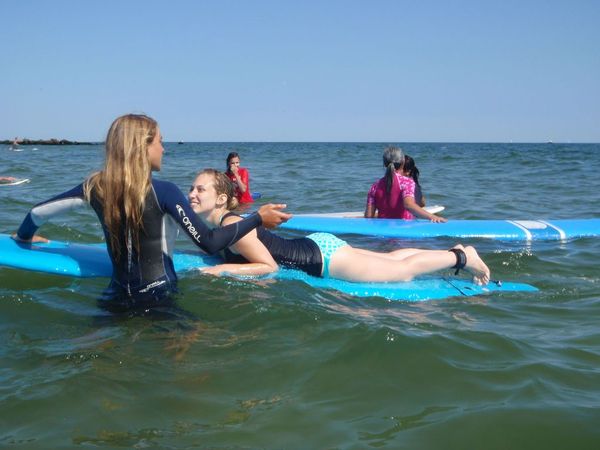 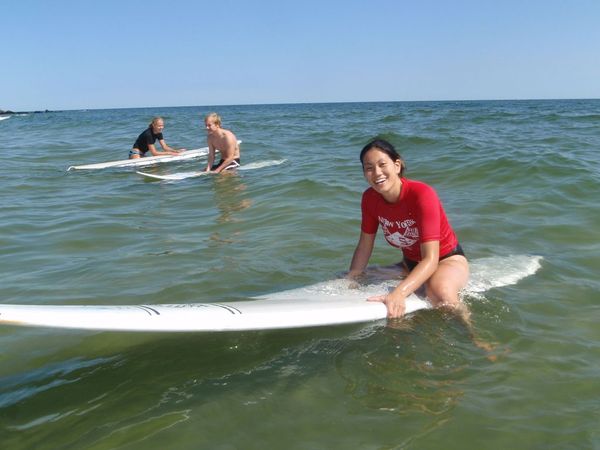 Unfortunately, all good things come to an end, and it was time to hand over the board to one of the guys. Through the lesson, I made some new buddies, and Stefan snapped a picture: 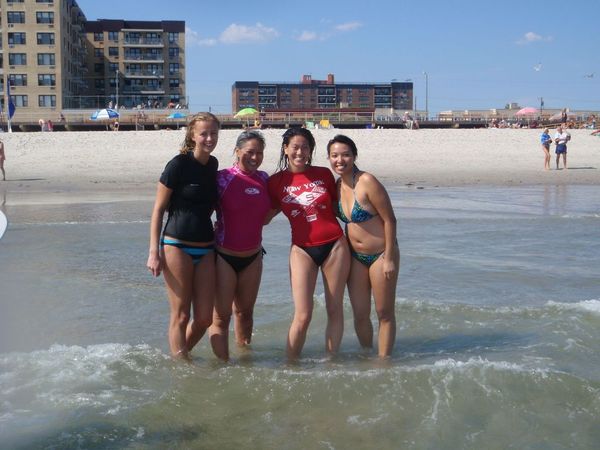 After the guys were done with their lesson, we took this group picture: 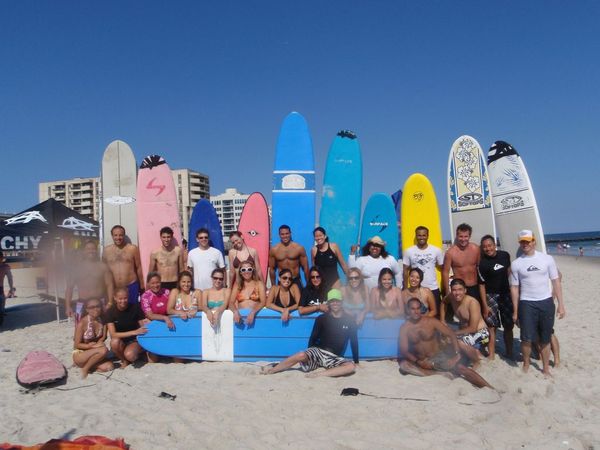 I also managed to get a photo with Ryan, my instructor:

Just in case you didn’t catch it earlier, here is the link for the Meetup group:  https://www.meetup.com/surfnyc

Everyone I met from the Meetup group was nice and it was fun to hang out and surf together. If you’re part of the Meetup group, you get some deals with Skudin Surf, and they have events during the week at bars in the city to socialize outside of surfing. We all went to the house party down the beach afterward which was a good time.