Although Men in Black was released in 1997, many of its film locations have popped up on our radar recently for preservation issues. With the recent demolition of 54 MacDougal Street (Rosenberg’s Fine Watches & Jewelry in the film), we realized that the movie nicely preserves images of New York City in the 1990s. For those who have not seen the original Men in Black, the film tells the story of two agents—one experienced (Tommy Lee Jones) and the other learning the ropes (Will Smith)—trying to save the world in 8 minutes from an intergalactic villain.

The Brooklyn-Battery Tunnel Ventilation Building, a former Standard Oil Building, posed as the Men in Black Headquarters where Agent J (Will Smith) and Agent K (Tommy Lee Jones) reported back to throughout the film The initial construction of the Ventilation building actually displaced an entire neighborhood in the 1940s known as Little Syria running about six blocks down Washington Street. We previously covered the building in our walk around the entire Manhattan Waterfront Greenway.

The film’s villain, Edgar the Bug, broke into 54 MacDougal Street, home of “Rosenberg’s Fine Watches & Jewelry” in the movie, in search of subatomic energy. Agent K and Agent J tracked Edgar down to the house for a showdown. Before it was demolished this year, we highlighted the Greenwich Village Society for Historic Preservation’s effort to protect the building. Four months later, Curbed released an article during the building’s demolition in July. The two agents sat on a bench similar to the one above in the 25-acre park in front of Castle Clinton after Agent J’s first visit to the Men in Black HQ. Agent K said, “I’ll give you till sunrise to think it over.” This film follows this with a short montage of Agent J sitting on a bench in the park from mid-afternoon to the evening. The park has been rehabilitated by The Battery Conservancy since the film was shot. In Liberty State Park, the wide-eyed squid was born with the strength to easily toss Agent J around Morris Pesin Drive. Just nearby, the Central Railroad of New Jersey Terminal, which was abandoned since 1967, was restored in 2011. The restoration of the terminal’s interior extended to the original rail signs just outside the building. People can still step on a ferry from the World Financial Center to see the sites and walk along the tracks. 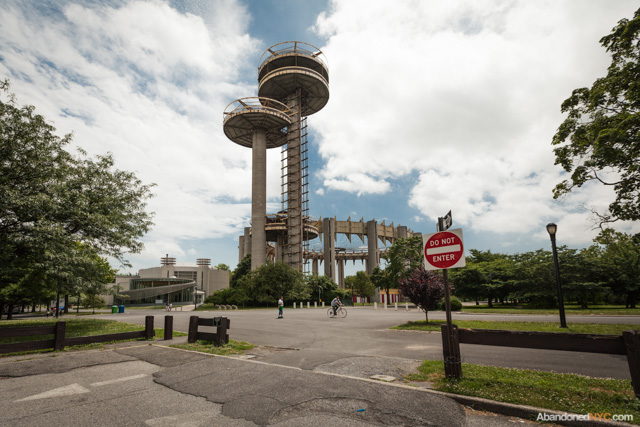 Agent J followed his instincts to the last possible exit Edgar the Bug could take to get out of this world: spaceships in Flushing Meadows. The two ‘spaceships’ were actually designed by modernist architect Philip Johnson as observation towers that once stood over the 1964 World’s Fair spearheaded by master builder Robert Moses. Today they still have a birds eye view over the New York State Pavilion. Read our article by AbandonedNYC about the ruins of the World’s Fair site and vintage photos from the 1939 and 1964 fairs.

There are still a few other locations featured in the film not to be forgotten. Remember the Pawn Shop? That’s the store at the corner of Orchard Street and Broome Street looking over the interaction. Another location is the “Office of Chief Medical Examiner” which is The 69th Regiment Armory standing strong at 68 Lexington Avenue between East 25th and 26th Streets. More obvious sites are the Guggenheim Museum, Park Avenue and the Queens-Midtown Tunnel.