Ivan Navarro: This Land Is Your Land - an installation currently at Madison Square Park Currently on exhibit at Madison Square Park is Iván Navarro:  This Land Is Your Land, a series of three water towers inspired by the artist’s experience of immigration. We’ve been looking forward to this installation since our January piece on 10 Unique Water Towers in NYC . Each water tower measurers about seven feet in diameter and about eight feet tall, allowing the public to easily walk underneath and view the neon lighting and reflections within each tower.  Each water tower houses different neon words, appearing vertically and rising upward as if endless.  Navarro’s childhood memory from the Pinochet regime in Chile led him to create and name his installation “This Land is Your Land,” based on the freedoms of the American experience and named after the 1940 Woody Guthrie folk song. 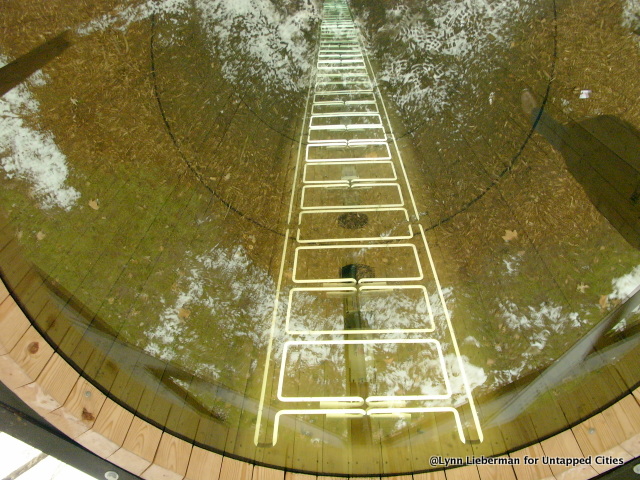 The Madison Square Park installation of Navarro’s water towers was timed with the release of the book Ivan Navarro written by Cay Sophie Rabinowitz and published by Skora Rizzoli. In it, he tells his personal stories giving the viewer a better understanding of the dark history in which he grew up in his native Chile, and his use of fluorescent lights as a symbol of hope. The interiors display images that include the words “me” and “we”, the second tower features the word “bed” and the third water tower boasts the image of a ladder. The artist’s intention is well expressed by the positioning of his installation and how it is seen from anywhere within the Park.  Facing North, the Empire State Building is in view.  Facing South, the Flatiron building is the background.  To the West is what once was the Fifth Avenue Hotel and to the East, the Metropolitan Life building. Brooke Kamin Rapaport, Martin Friedman Senior Curator of the Madison Square Park Conservancy had this to say about the installation: “This project is significant for our program because Navarro’s work tackles issues pertaining to democracy, social structure and how language can simultaneously manifest liberation and oppression. While wood water tanks are a ubiquitous sight on New York City’s rooftops, the artist loads them with substantive content demonstrating how sculpture can function as object and as a messenger of critical issues today.”

Madison Square Park is filled with art from its historic lampposts to its statues, curated outdoor art installations and even a Shake Shack, which started as a hot dog cart during the Conservancy’s first art installation.  The Park is open daily from 11am to Midnight and we can enjoy this exhibit until April 13th.