If you were to stroll down 4th Avenue between Union Square and Astor Place back when the area was called “Book Row,” the sights and sounds would differ greatly from those of today. While these six blocks are now lined with a variety of restaurants and stores, from the 1890s to 1960s, they were dominated by just one kind of business: secondhand bookstores.

In fact, 48 bookstores once spanned this segment of Fourth Avenue, earning it the title “Book Row.” However, these bookstores either relocated or closed entirely by the 1960s. The only vestige of Book Row is the renowned Strand Bookstore on Broadway and East 12th Street, and its survival is quite a story in itself. The Strand, which opened in 1927 on 4th Avenue and eventually moved to its current location, still thrives today despite the decline in independent bookstores.

The main pioneer of the 4th Avenue book business was George D. Smith, who co-founded a bookstore at 830 Broadway around 1890. He then started his own book business along 4th Avenue.

Soon after, carts and shops filled with books, catalogues, prints and sketches densely populated the area, making it a bustling haven for bibliophiles and even some famous writers. In fact, André Breton, author of the first Surrealism Manifesto, Jack Kerouac and Robert Frost, were three of many famous customers of a shop called “Books N’ Things.”

Based on memories from over 160 booksellers and consumers of the time, Marvin Mondlin and Roy Meador captured the vibrant essence of Book Row and compiled the histories of its individual bookstores in Book Row: An Anecdotal and Pictorial History of the Antiquarian Book Trade (a fascinating read, by the way). These bookstores often specialized in products or genres and only sold secondhand or rare items, unlike large retail bookstores today. In 1922, Guido Bruno explained why the area was so successful: “No matter how large and complete the stock of a secondhand bookdealer may be, his neighbor’s collection will be quite different. The clients of secondhand bookshops like ‘to browse about,’…they love to have a large territory in which to hunt.”

For instance, Mondlin and Meador mention that the Corner Bookshop sold cookbooks, the Aberdeen Book Company was one of the first stores on Book Row to sell paperbacks, a store called “At the Sign of the Sparrow” sold theater memorabilia, and the Green Book Shop was reputed for its stellar fiction collections. The rarities available on Book Row led to the creation of a crime ring dedicated to books, as documented in Thieves of Book Row: New York’s Most Notorious Rare Book Ring and the Man Who Stopped It.

Frederick Lightfoot, who purchased books from Book Row in the 1930s, once described the booksellers as “people of remarkably strong individuality, probably mostly self-taught to a high degree of knowledge about many subjects as well as of the books they handled.” He added that they “were a very different breed from the merchandisers of today’s new bookstores.”

Unfortunately, this passion and integrity could not compete against rising rent prices in the 1950s. This caused many booksellers to either close entirely or relocate by the 1960s, with some stores moving to Broadway. New media, the rise of large retail bookstores like Barnes & Noble, and the 1954 closing of the nearby Wanamaker’s Department Store all contributed to a decline in consumers. 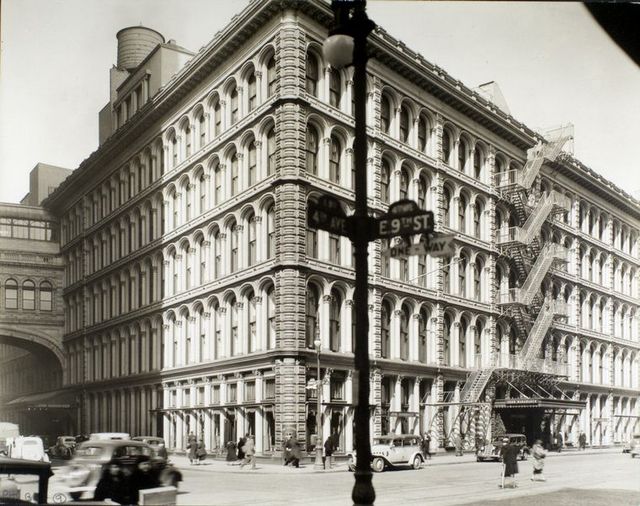 However, the booksellers did not give in easily.  According to Mondlin and Meadow, in 1942, a red flag was raised when New York City authorities asked all dealers to remove the bargain carts and stands outside their stores. The owners of 23 bookstores put aside their competition and formed the 4th Avenue Booksellers Association, with initial headquarters at 73 4th Avenue.

In 1958, it was proposed that the booksellers move underground to continue their businesses, but many protested. By 1969, the situation’s urgency peaked, as reflected by the association’s request for 4th Avenue street signs between 8th and 14th streets to be altered to “4th Avenue-Book Row.” The government did not carry out this request.

Though the association only existed for about 25 years, another Book Row association from 1949, the Antiquarian Booksellers of America, continues today.

Evidently, Book Row’s decline was only the start of a broader trend in America. According to the NY Times, the number of independent bookstores nationwide fell from 2,400 to 1,900 between 2002 and 2011. While the secondhand bookstores will never quite flourish as it did on Book Row, the remaining ones scattered throughout New York City show that despite changing times, the business can never truly vanish. Even Barnes & Noble, the chain bookseller that put pressure on Book Row has had to close many branches, including a flagship at Lincoln Center.

Yet, in 1996, Steve Crowley opened the Alabaster Book Shop at 122 4th Avenue. He was the first person to open a bookstore on former Book Row in twenty years, showing how secondhand bookstores can still live on.

For more information about current independent bookstores of NYC, check out the Top 10 Bookstores in Manhattan.