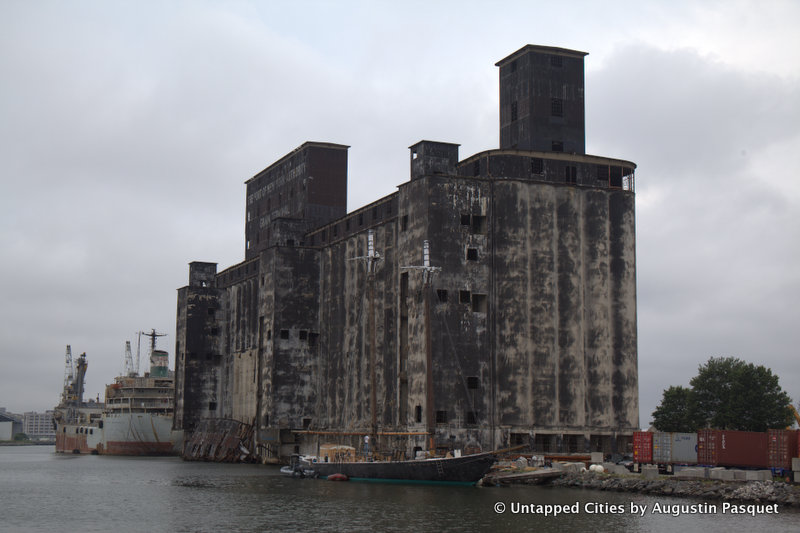 It’s been nearly fifty years since a freighter docked at the Red Hook Grain Terminal. now black mold overspreads its concrete silos like a mourning veil. Its origins can be traced to the construction of the New York State Barge Canal at the early 20th century, which widened and rerouted the Erie Canal to facilitate the latest advances in shipping. But by 1918, New York City was lagging behind in the nation’s grain trade and the canal was failing, operating at only 10% of its capacity. This now defunct facility was built in the Port of New York to invigorate the underused waterway—a state-run grain elevator in the bustling industrial waterfront of Red Hook, Brooklyn.

The structure is largely composed of 54 circular silos with a combined capacity of two million bushels. Grain was mechanically hoisted from the holds of ships, elevated to the top of the terminal, and dropped into vertical storage bins through a series of moveable spouts. When a purchase was made, the force of gravity would release the grain from the bins, at which point it was elevated back to the top of the terminal and conveyed to outgoing ships.

The collapse of the grain trade made up a small part of an overall decline along Red Hook’s industrial waterfront in the second half of the 20th century as shipping methods evolved and moved elsewhere. When the jobs dried up, much of the area cleared out, leaving a slew of vacant warehouses and decaying docks. In the year 2000, most of Red Hook’s 10,000 residents lived in the Red Hook Houses, one of the city’s first public housing projects. The development was a notorious hotbed for crack cocaine in the 80s and early 90s, but conditions have gradually improved over the years. A near complete lack of major subways and buses stalled gentrification in the neighborhood, but signs are becoming more common. Today, Van Brunt Street is scattered with specialty wine bars, cupcake shops, and craft breweries, and IKEA opened in 2007 on the site of a former graving dock.

The Grain Terminal has been the subject of a number of reuse proposals over the years, but none of the plans have amounted to real progress at the site. The building sits on the grounds of the Gowanus Industrial Park, which currently houses a container terminal and a bus depot, among other industrial tenants.