It’s an auspicious day for the opening of Edge, the highest outdoor sky deck in the Western Hemisphere, weather wise at least. Coronavirus certainly does not seem to have dampened the enthusiasm of the crowd gathered here for the official press opening this morning, after which Edge will open to the public. 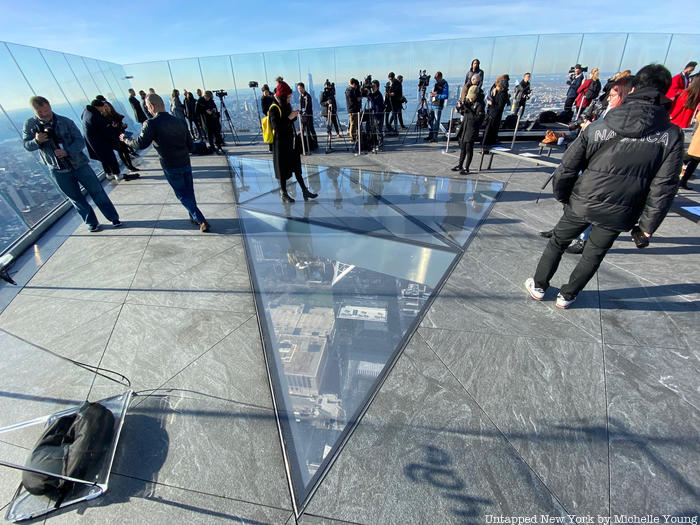 Located at the top of 30 Hudson Yards at 1,131 feet above the city, the foot-tingling experience features a glass floor and nine-foot tall glass walls that angle outwards over the Manhattan streets. We have some tickets left for opening day and week to Edge (which includes a tour of Hudson Yards) or you also book a private tour of Edge!

You enter through the Shops at Hudson Yards on the fourth floor of 20 Hudson Yards, walking though an immersive hallway with displays and sound effects that tout the engineering feats of the development. A 52 second elevator ride that whisks you to up to the 100th floor, which includes an animated video that melds illustration into photography showing the construction of Hudson Yards. Edge extends out over 80 feet into the Manhattan skyline. On the 100th floor, between the deck and the indoor portion of the experience, you get a 360 degree view that looks out over New York City — you can see Central Park, the Statue of Liberty, the Manhattan skyline, and clear across New Jersey. There’s a bar on the 100th floor, so you can grab a drink and take it in the views, or ascend the glass steps up to the 101st floor, which has a bar, café, event space, and the restaurant Peak (it opens for dinner on Friday, March 12th). Structurally, it’s an engineering feat. The deck weighs 765,000 pounds but seems to float, defying gravity. Each of the fifteen sections of the deck weighs between 35,000 and 100,000 pounds, connected together by bolts and anchored off of the East and South facades. Each of the 79 glass panel walls weigh 1,200 pounds, angled out at 6.6 degrees so you can feel a little like what urban explores do when they go “rooftopping.” One of the main highlights is the 225 square foot glass floor, akin to what you see at the Grand Canyon Skywalk. It’s a toss up which is more scary: the straight drop to the city below or to the canyon floor. Grand Canyon is higher up but the deck doesn’t extend horizontally out quite so far. There’s certainly no other outdoor observation deck with that feature anywhere else in New York City right now. 30 Hudson Yards is designed by the architecture firm KPF, with interiors by the Rockwell Group. A Hudson Yards official said that coronavirus has not affected visitor numbers at the development so far and there are clear precautions listed on signage throughout, including efforts including daily deep cleanings, reducing capacity on the Edge in response and providing hand sanitizer. There will also be free tours given to school groups every week, including one just before the deck opens officially to the public at 1 PM today.

Here are some additional photos: We have some tickets left for opening week to Edge (which includes a tour of Hudson Yards) or you also book a private tour of Edge!

Next, check out what it looks like in Vessel, also at Hudson Yards.