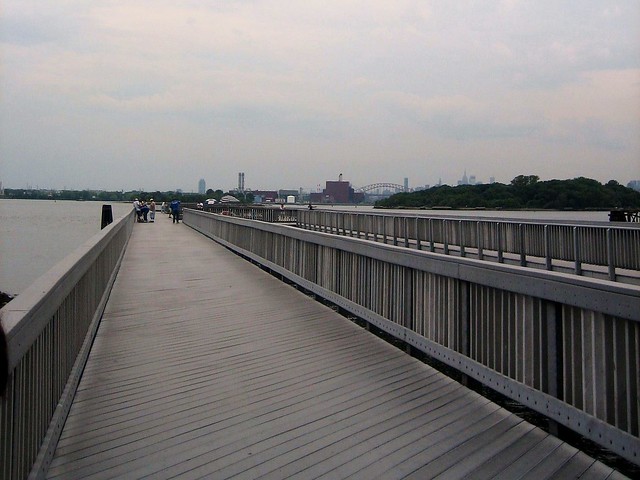 The New York Times has described Barretto Point Park as “a secret oasis in the Bronx.”   We recently visited the park’s next-door attraction, the Tiffany Street Pier, and the five-year-old Hunts Point park with my supervisor, a land use planner for the Department of Citywide Administrative Services (who also deserves thanks for  this trip).

The 450-foot-long Tiffany Street Pier juts out over the Long Island Sound just west of the park. Originally designed by the New York City Department of General Services (now DCAS), the pier was a feat of engineering: made nearly entirely from an innovative recycled plastic material, the “plastic lumber” structure was intended to last far longer than the crumbling wooden one it replaced.

It probably fared well against water and worms, but, sadly, it caught fire after being struck by lightning multiple times just a year after its construction, in August 1996.

The pier in its current incarnation was rebuilt relatively quickly, opening again in 2000. It was such a hit the first time around that it is virtually the same design, except built with much more resilient materials. So far so good. 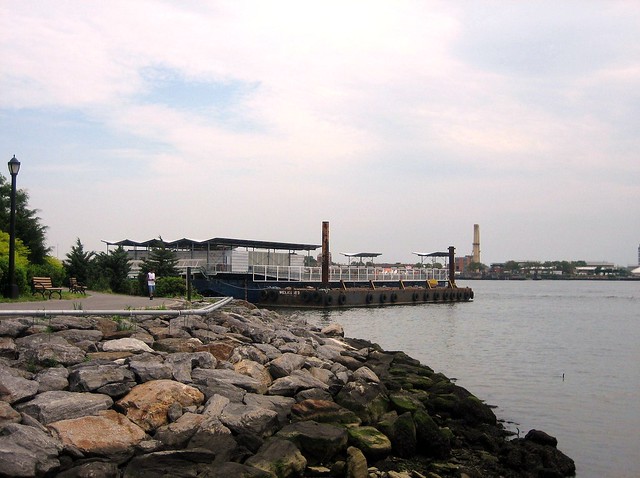 Southeastern view from the pier 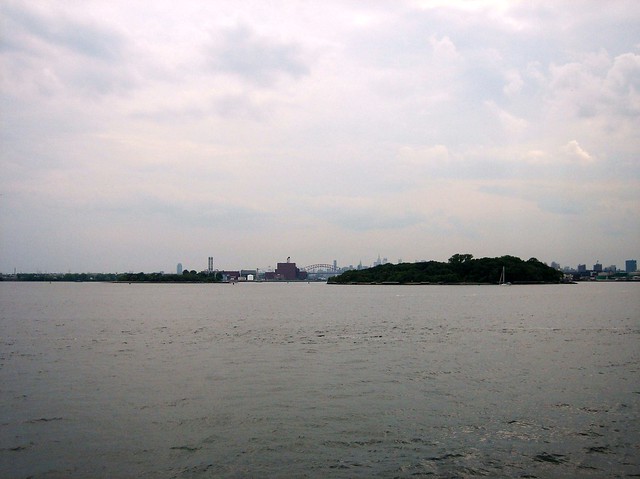 To the right, the site of another, far more tragic New York City fire: North Brother Island, where PSGeneral Slocum  sank in 1904, killing over 1,000 passengers. South Brother Island is behind it, to the left. 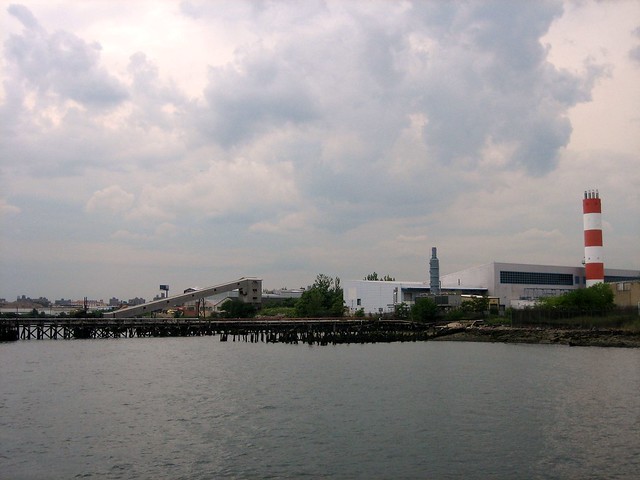 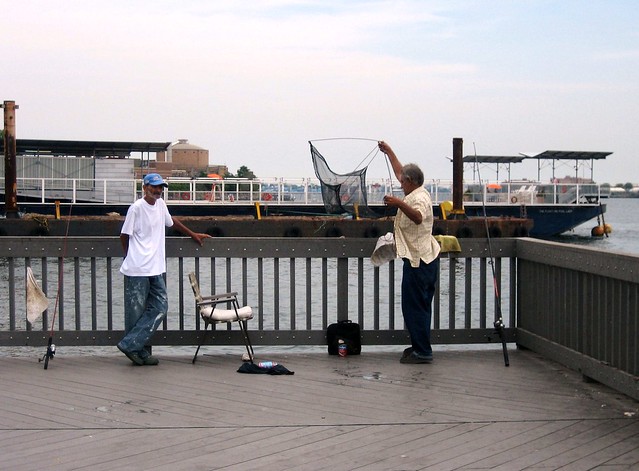 Fishing, not an uncommon activity on the pier 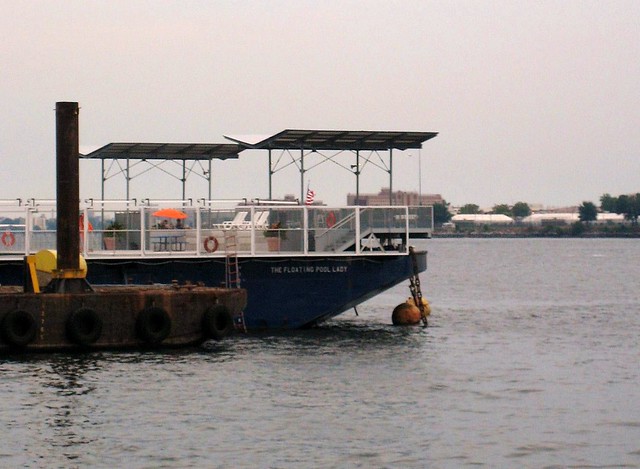 Looking over at the The Floating Pool Lady, the floating pool, docked at its home in Barretto Point Park since 2008

Back on land, Barretto Point Park was nearly irresistible: lush lawns and rocky landscaping were everywhere. There was almost a sort of unshakeable novelty to its beauty: It’s in Hunts Point, just a quick jaunt over to one of the world’s largest food distribution sites; it sits squarely on a former brownfield; and it looks right into Rikers, for crying out loud. But it’s a testament, mostly, to the city’s aggressive waterfront reclamation efforts, as well as the fact that New Yorkers will take refuge just about wherever we can make space for it. 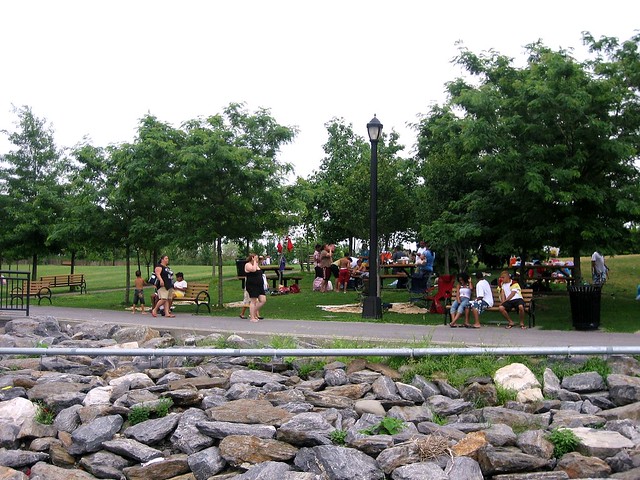 Take “the Beach,” for example. Roughly big enough to hold maybe a dozen spread-out towels, this is one of the multiple highlights of the park. Just secluded enough from the picnic tables, children’s play fountains, the small amphitheater, and even the floating pool, its gentle slope and panoramic views of the water provide a relief from the relief. It’s laughable, but only momentarily. Had it been sunnier and that black hose thing not been there, I’ve little doubt that it would have been full of sunbathers. 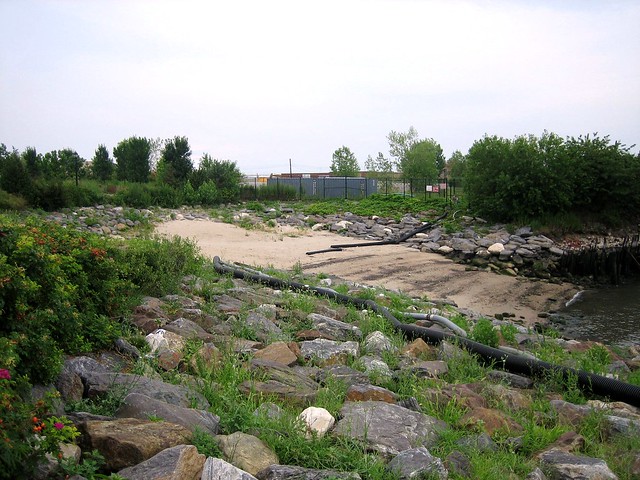 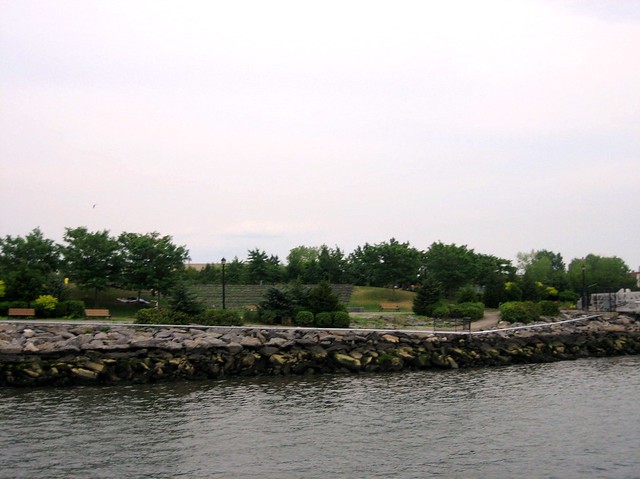 Another more serene stretch of Barretto Point Park, viewed from the pier

All photos by Judy Chang.