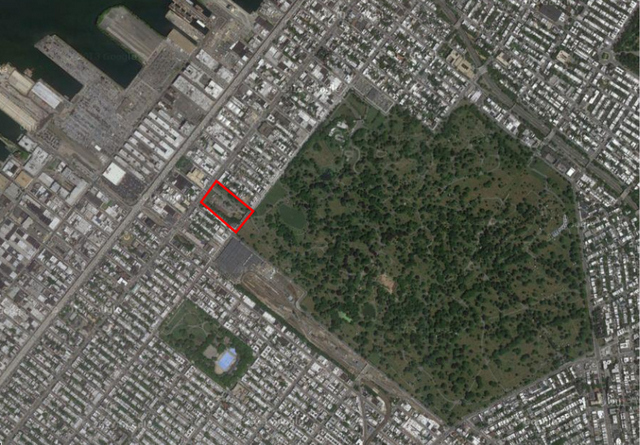 You’re likely familiar with the gorgeous entrance to Green-Wood Cemetery across from the abandoned McGovern-Weir greenhouse, the lush rural landscape of the cemetery, and maybe even the catacombs inside the cemetery. But there’s a mostly forgotten, undeveloped little outcropping (highlighted in red above) that also holds some great Revolutionary War history: the beginning of the Battle of Brooklyn (also known as the Battle of Long Island or the Battle of Brooklyn Heights). In this rectangular plot of land, which contains maintenance facilities and a garage right alongside existing gravestones, once stood the Red Lion Inn. The inn was situated at the junction of three country roads: Martense Lane, the Narrows Road, and Gowanus Road. The first two are still noted with street signs inside this portion of Green-Wood Cemetery: Fourth Avenue entrance to Green-Wood Cemetery, which connects to the main part of the cemetery under the Fifth Avenue overapass. The Red Lion Inn was located on the right of the gate house.

According to a plaque on the site here in Green-Wood Cemetery presented by the citizens of the state of Delaware, the Delaware Regiment:

Outnumbered four to one, and nearly encircled, Stirling ordered the Delaware Regiment to make a fighting retreat. With colors flying they made an orderly withdrawal, and against great odds, crossed Gowanus Creek, to safety. Following the battle the regiment’s commander reported two men killed and 24 missing, being captured, killed, or drowned during crossing. Noted for its discipline and bravery, the Delaware Regiment continued to serve with distinction throughout the war. There isn’t any record of what the Red Lion Inn looked like unfortunately, but it was likely similar to other roadside country inns on Long Island, built of wood. A final fun fact: you can see the names of every path in Green-Wood cemetery on its zoomable, interactive map.