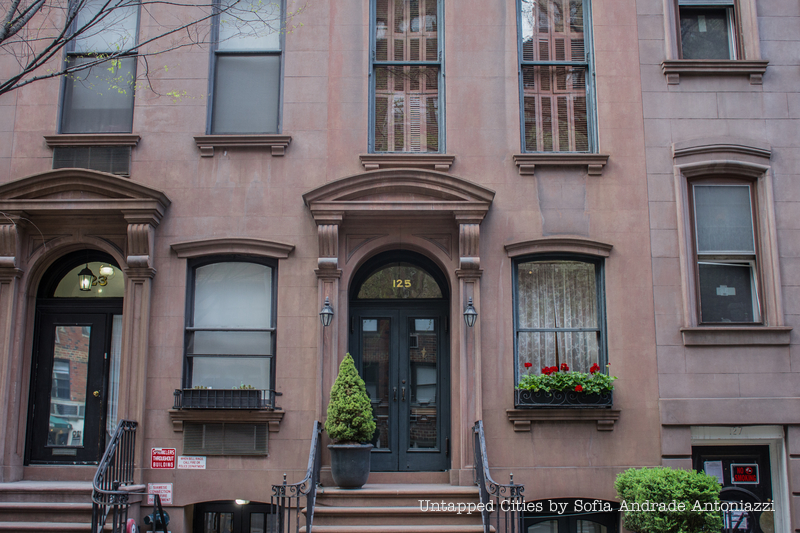 The Roosevelts’ lineage and history are intrinsically tied to New York’s narrative. Most notable are the legacies of Theodore Roosevelt, Eleanor, and Franklin Delano Roosevelt. The Roosevelts’ many public contributions, private property endowments, and pioneering governmental policy work, all serve to immortalize them as one of the most eminent names in United States history. Theodore “Teddy” Roosevelt is the only United States President born in New York. He was born in the house pictured above, in 1858, located at 28 East 20th Street in Manhattan. His family lived in this house until 1872. The original home was completely demolished in 1916, but in 1919 the property was purchased to erect a replica of Roosevelt’s birthplace.

Roosevelt was adamant against having a “shrine” constructed in his honor; however, his relatives only acquiesced to this request until he passed in 1919.  The reconstructed home, which is made to look like the interior design of the house during the years 1865-1872, was donated to the National Park Service in 1963 which runs tours of the site.
Teddy was one of four children and due to severe ailments such as allergies and asthma, he spent most of his childhood confined indoors and in this house. To fill his time, he consumed mass amounts of natural history books. He even called his collection of books and artifacts from his family’s travels in his room, the “Roosevelt Museum of Natural History”.

This zest for ancient history was very much fueled by Theodore Roosevelt, Sr., Teddy’s father, and one of the founders of New York’s American Museum of Natural History in 1869. In October 2012, the museum reopened the Theodore Roosevelt Rotunda after a two-year conservation of the murals.

The house stores many interesting pieces, taxidermy, and original artifacts from Roosevelt’s time in this property. The tour guide pointed out pieces of furniture that were unique to Teddy, such as the velvet ottoman placed by the fireplace just for him. The velvet chair was there for him due to the horse-hair-covered chairs that were very irritating to his skin. The gas-powered chandeliers and lamps in the salon also aggravated his asthma. His father believed that the cure-all for Teddy’s asthma was exercise. Thus, a gymnasium was installed on the second floor, off of the nursery porch. You can see more images of the interior here.