While known for its quick pace of life and frenzied atmosphere, New York City also contains places of peace and serenity. Hidden within Central Park lies the Conservatory Garden: a quiet, relaxing location for people to unwind and connect with a bit of nature within the grand city. Actually split into three separate gardens, the Conservatory Garden offers a taste of English, French, and Italian botanical design all within the same six-acre area. The garden’s unique style lifts visitors out of the chaos of New York City to an almost fairy-tale like land. 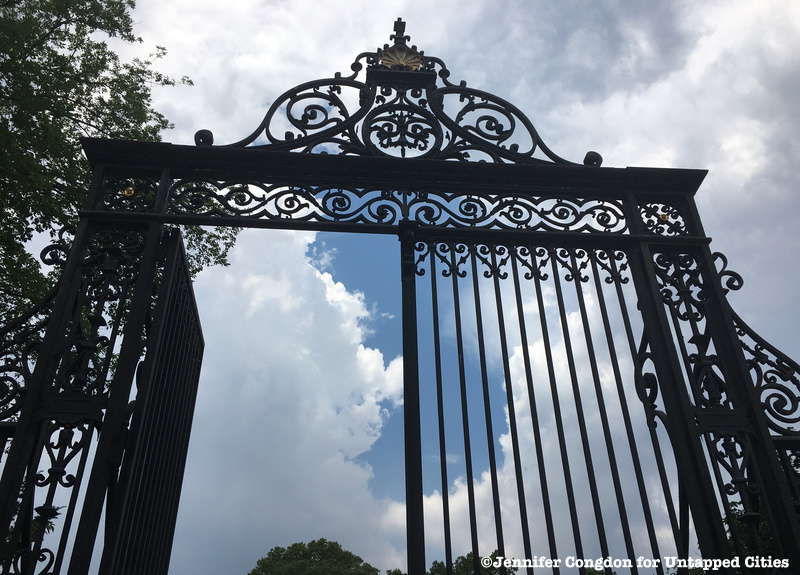 The land was originally occupied by a massive glass conservatory from 1898 up until 1934, which is where the garden gets its name from. The Garden’s entrance also stands upon the original entrance of the Vanderbilt Mansion, and is still guarded by Mansion’s iron gate today. Landscape architect Gilmore D. Clarke later transformed the land into the Conservatory Garden, which opened to the public in 1939. The first section of the Gardens, the North Garden, exhibits classic French botanical design. A famous fountain named the Three Dancing Maidens (or Untermyer Fountain) occupies its center, and acts as the garden’s main attraction. The sculpture was made in 1910 by German sculptor Walter Schott, and is renowned for its intricate detail. The women’s dresses appear flowing and clinging to their wet bodies as they dance about the water; a difficult illusion to capture on a solid statue. The fountain is decorated with an elaborate array of flowers which change upon season: tulips in spring, and chrysanthemums in fall. Although there are no flowers in the winter, the fountain’s water will sometime freeze and form large icicles upon the women’s bodies, creating an entirely new and interesting image. Then there is the Italian styled Central Garden, surrounded by pathways of crab apple trees which blossom in the Spring. This section of the gardens contains a beautiful wisteria pergola decorated by purple flowers (and sometimes home to a lot of napping raccoons). The Italian garden has been deemed most photogenic, due to its extensive floral decorations and romantic aura. Wedding photographers frequent the area with new couples, further contributing to its enchanted ambiance. The final piece of the Conservatory Garden is the English South Garden. This section of the gardens is less seasonally specific than the other two, as its flowers are planted to bloom year round. Like the French Garden, the English Garden displays a statue at its center (as seen in the image at the top of the article). This statue was built in 1936 by Bessie Potter Vonnoh, and is based on characters from Frances Hodgson Burnett’s The Secret Garden. As the most popular out of the three, this section of the Conservatory Garden is frequently populated by readers, writers, and everyday people strolling about the pathways.

Join us for an upcoming tour of the Secrets of Central Park:

Next, check out The Top 10 Hidden Gardens in NYC and read about Daily What?! The Hidden Rooftop Gardens of Rockefeller Center.