It’s the 135th anniversary of the opening of the Brooklyn Bridge today, opened to the public on May 24, 1883! While we’ve covered the secrets of the bridge, the fun facts about its construction, the famous scam to buy the Brooklyn Bridge, and more, we’re excited to share these amazing photographs inside the Brooklyn Bridge champagne vaults and anchorages for the first time. They were taken by an urban explorer whose name we can’t disclose, but he was very well known in the urbex scene for a time before he took down his social media accounts. He shared these photos with us last fall and we’ve been waiting for the right moment to publish them.

Inside the limestone and granite structures that support the on-ramps to the Brooklyn Bridge, designer John A. Roebling originally envisioned shopping arcades, to be called the Brooklyn Bridge Anchorage. Today, the towers and the anchorages on both the Manhattan and Brooklyn sides are closed, but open windows on the Manhattan side give an inkling to the spaces inside.

According to Julie Golia, Director of Public History at the Brooklyn Historical Society, Roebling “gave the inside the same Gothic design as the towers, with beautiful 50-foot-high cathedral ceilings. But the shopping arcade plan fell through, and for most of history they’ve been municipal storage.” 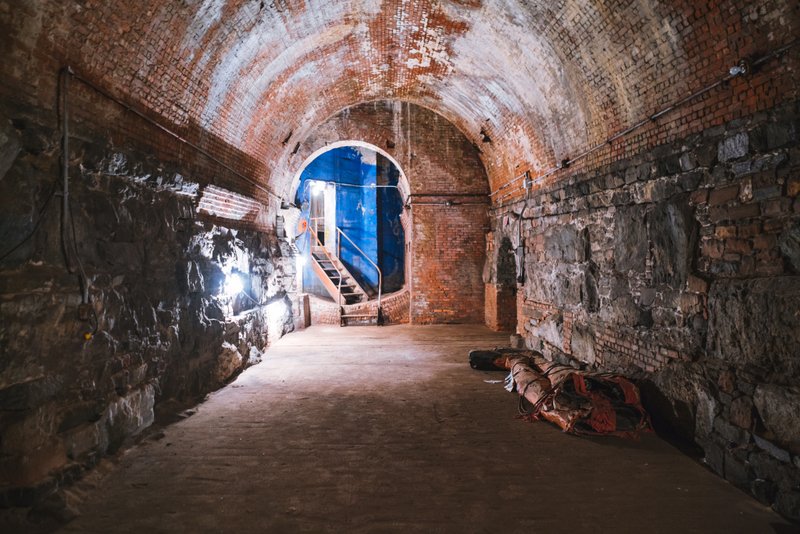 The upper level of the champagne vault. Photograph by undisclosed photographer.

The cavernous vaults, which are located closer to the foot of the bridge, were rented out as storage space holding wine, champagne and liqueurs, as well as newspapers from the Evening World and produce from the Fulton Fish Market. Year round, the alcohol was kept in the stable temperatures afforded by the Brooklyn Bridge vaults and the rent collected helped offset the cost of constructing the bridge.

It is known that the vaults were constructed first in 1876, likely to appease distributors like Luyties and Racky’s whose storage facilities were demolished to build the bridge. A faded logo for Pol Rogers, the French champagne house favored by Winston Churchill, is still visible. The vaults were closed during World War I and repurposed for non-alcohol storage uses during Prohibition. In 1934, six months after the repeal of Prohibition, the city ceremoniously turned over the keys to a new tenant, Anthony Oechs & Co., an alcohol distributor, at a party inside the vaults attended by hundreds of revelers. The anchorage on the Brooklyn Bridge side was accessible in an almost two decade-long curation by the public arts organization Creative Time in honor of the bridge’s centennial from 1983 to 2001, but the spaces have been closed to the public since 2001 due to security concerns after 9/11.

Our photographer reports that during his visit to the champagne and wine vaults, there were “some barrels and broken jugs,” still present. In the anchorages, the photographer found a poster from 2001 about Creative Time’s installation and tells us that it seems that the artists quickly packed up and left some things behind.

Inside the bridge structures, the photographer also found many small side rooms along with train tracks: Another curious find was uncovered in 2006 inside the Manhattan-side tower of the Brooklyn Bridge. A veritable time capsule was discovered by city workers which contained a stockpile of supplies in the event of nuclear attack. Put into reserve at the height of the Cold War in the late 1950s and early 1960s, this space, intended as both fallout shelter and storeroom, was forgotten for nearly fifty years.

As reported by The New York Times at the time of the discovery, the vault contained “water drums, medical supplies, paper blankets, drugs and calorie-packed crackers — an estimated 352,000 of them, sealed in dozens of watertight metal canisters and, it seems, still edible.” Boxes with blankets were labeled “For Use Only After Enemy Attack.” Learn more on our upcoming Secrets of the Brooklyn Bridge walking tour!