It’s no surprise that New York City is filled with abandoned places, as evidenced by our “Abandoned NYC column.” Empty buildings and decrepit developments are sprinkled throughout the boroughs — and Staten Island is no exception.

It may be New York City’s least populated borough, but it’s home to plenty of eerie sites, including abandoned hospitals, theaters, museums, and even a graveyard for boats.

Here are ten such places to check out: One of the oldest military installations in the country, Fort Wadsworth occupies 226 acres of Staten Island’s northeastern shore on the Narrows of New York Harbor. It was fortified by the British in 1779 and served as the prime defensive location throughout the rest of the Revolutionary War.

The original fort that stood was demolished and reconstructed as Fort Richmond between the years 1847 and 1862. In 1865, three years following its construction, the structure was renamed Fort Wadsworth in honor of Brevet Major General James Wadsworth.

Although the structure was occupied in some capacity until 1995, it was mostly left unused and eventually fell into disrepair. That same year, it was turned over to the National Park Service’s Gateway National Recreation Area. While its third system forts (Battery Weed and Fort Tompkins) are well maintained and partially occupied by the Coast Guard, Army Reserve, and Park Police, other sections are abandoned and remain off-limits to the public.

The Staten Island Farm Colony is a 46-acre site that was designed to provide housing for indigent populations in exchange for their labor. At its height in the 1940’s, the Farm Colony had approximately 1,700 residents, including famous photographer Alice Austen.

Many dark stories are associated with The Staten Island Farm Colony, making the site quite legendary. Bank robber, Willie Sutton, was once a city worker at the complex, and serial killer, Cropsey, was blamed for a 1920s abduction and murder of a seven-year-old boy on the grounds of the Farm Colony.

This legendary site has laid vacant for almost forty years, but is being redeveloped into a multi-use complex with commercial space, and affordable/senior housing options.

The Defenders, filming in The Paramount Theater. Photo: Sarah Shatz/Netflix

The Paramount Theater in Staten Island’s Stapleton District first opened in October of 1930, and served as one of the borough’s premiere theaters. The Art-Deco style building could hold up to 2,300 patrons and was constructed on the site of Cornelius Vanderbilt‘s childhood farmhouse. Paramount had undergone a major $135,00 renovation in 196

Despite a major renovation, the theater eventually closed in 1977 and later reopened as a nightclub and then, briefly, as a concert venue. In 1980, however, it closed its doors permanently.

After the site was sold in 2008, restoration plans began in an effort to reopen the venue. However, the process stopped in 2010 and didn’t begin again until 2016 with the ultimate goal of turning the building into a restaurant, catering hall, and events venue; in the meantime, the site has served as the backdrop for many shows, including Gotham and Marvel’s The Defenders. Developed across the street from the aforementioned Staten Island Farm Colony, The Seaview Hospital opened its doors in 1913.

Like many tuberculosis hospitals in the 20th century, the grounds and buildings were designed with an “open air” concept in correlation with the popular belief that fresh air and sunlight were the best cures for infectious diseases. At one point in time, the hospital served as the largest tuberculosis sanitarium in the country.

Today, the Seaview Hospital site is partially occupied, having been renovated and repurposed. It is in line to be renovated as a mixed-used, health and wellness-focused development.

5. The Buildings of The National Lighthouse Museum The National Lighthouse Museum opened in 2015 and sits on the complex that was once a part of the U.S. Light-House Establishment. Even before then, however, the site was home to the former Marine Hospital, known as The Quarantine, where 1,500 of the city’s diseased were housed.

When the U.S. Light-House Establishment took over the space, it constructed new buildings to serve the U.S. Lighthouse Service’s Third District until the Lighthouse Service was folded into the United States Coast Guard in 1939. After the Coast Guard relocated to Governors Island in the 1960’s, the location was closed and was partially demolished and turned into the Staten Island ferry maintenance facility.

Many buildings including the lamp shop, barracks, and the administration building are still standing, but remain abandoned despite the recent renovation and opening of the museum. Staten Island’s Mariner’s Marsh is one of New York City’s creepiest locations. The abandoned site was once a shipyard that produced warships, and prior to that it was Milliken Brother’s Structural Iron Works.

The marsh is overtaken with freshwater ponds, and is littered with abandoned cars, boat hulls, and disintegrating piers that serve as a vague reminder of what the site once was.

Mariner’s Marsh has remained vacant for an environmental investigation since 2006. 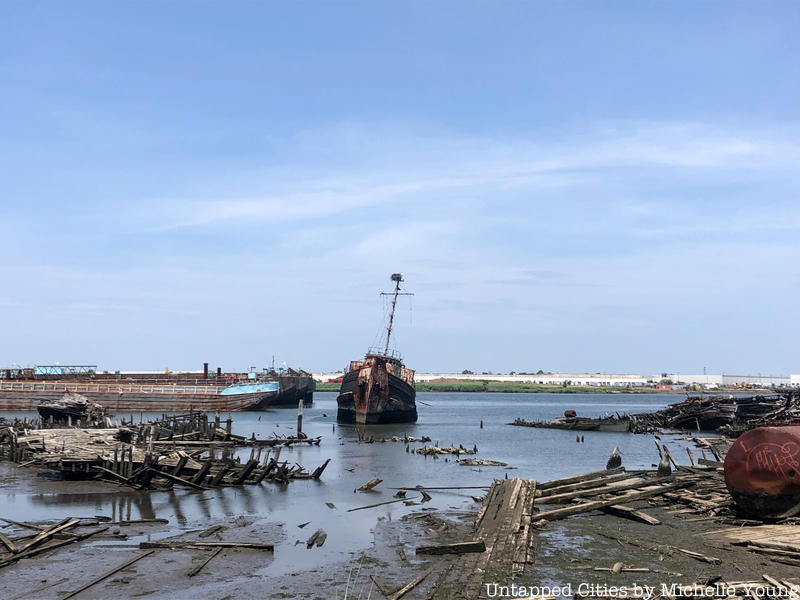 The Witte Marine Scrapyard was founded in the 1930’s by John J. Witte and is now the “official dumping ground” for decomposing vessels, in addition to decommissioned tugboats, ferries and barges. Despite its desolation location, the “accidental marine museum” is becoming one of New York City’s many tourist attractions.

Just off of Staten Island, between Newark Bay and the Kill Van Kull, sits Shooter’s Island, a former hunting preserve for wild geese during the colonial era.

After the Revolutionary War, this 43-acre island became an industrialized site with a shipyard and oil refinery. The Townsend-Downey Shipbuilding Company constructed yachts on the island, including a racing yacht for Kaiser Wilheim II and the schooner yacht, Atlantic, which set the record for the fastest transatlantic passage by a monohull in 1905.

Shooter’s Island then became a marine junkyard after World War I, and was eventually abandoned by 1921. Now owned by the City of New York and maintained by the NYC Parks Department, the island remains abandoned to this day.

The Samuel R. Smith Infirmary, also known as the Staten Island Castle, was a red brick chateau that stood in Thompkinsville, Staten Island for 124 years.

Constructed in 1863, the infirmary was Staten Island’s first private hospital. It was founded by the borough’s upper class, initially as an establishment for Staten Island’s poor. In 1916, however, it opened to the general public and was renamed Staten Island Hospital.

In 1979, following an increase in patient population, the hospital relocated to a new building. Its former campus consequently sat abandoned and was officially demolished in March 2012. For almost four decades, empty liquefied natural gas (LNG) tanks sat rusting in the neighborhood of Rossville, Staten Island. The bulky tanks were considered an eye sore for many members of the community.

The tanks were built in 1976, but never served their intended purpose to hold fuel. Instead, they sat neglected after their construction.

In 2015, permits were filed with the city in hopes of demolishing the tanks to make way for factory outlet center with a public park and movie theater. However, a stop work order was issued in 2016 by the State Department of Environmental Conservation due to the property owner failing to obtain a necessary permit from the Department of Environmental Conservation (DEC).

Next, check out 10 Abandoned Hospitals and Asylums Around NYC, or 10 Abandoned Movie Theaters in NYC and NJ. Get in touch with the  author on Instagram @mjohnathonrich.