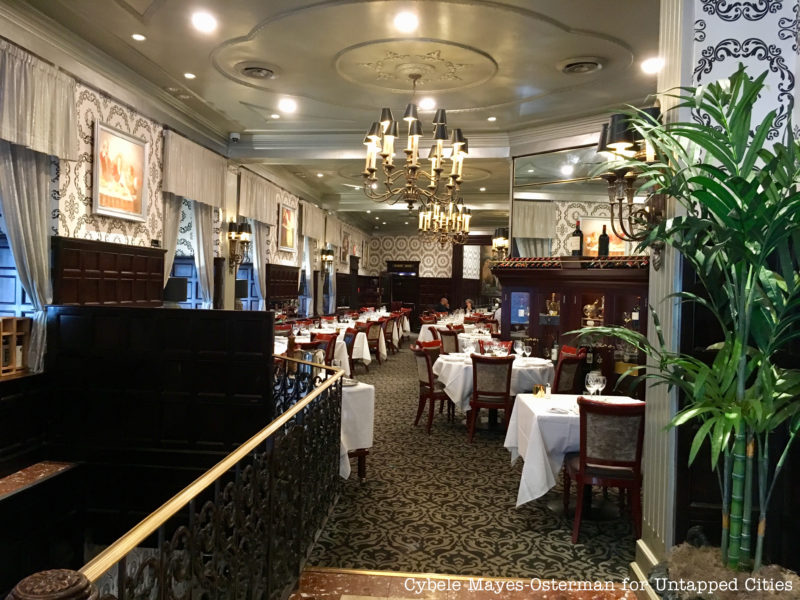 The Gilded Age is having a comeback. Hipsters are sporting mutton chops, pickling is the new knitting and a restaurant named 1 Knickerbocker recently opened in Bushwick featuring modern interpretations of Gilded Age cuisine. Mayor Bill De Blasio suggested we might be re-living that time period with an economic condition comparable to A Tale of Two Cities.

“Local” was not a virtue unless you were talking about East River oysters. The city enjoyed the bounty of international food markets, which imported everything from pineapples to elk meat. Spices arrived regularly from India and China. Chesapeake Bay area hunters nearly exterminated the canvasback duck to keep up with the hunger for them in New York City.

Thousands of food trends have washed over the city since the 19th century, yet there are a few relics of the past that can still be enjoyed in post-Knickerbocker New York.

Gilded Age men loved their mutton chops, both on their cheeks and on their plates. Today, mutton (adult sheep) is a rare find, though it’s the specialty of the house at Keen’s Steakhouse. Open since 1885, Keen’s is a step-back into the lair of 19th century men.

If you read Italian or Latin, you’ll know right away that the star of sanguinaccio is blood. Italians streamed into New York in the 1880s, bringing with them many of New York’s most beloved foods. Sanguinaccio, a sweet pig’s blood pudding made during the late winter pig slaughters, was one that never quite caught on. Italians today consider sanguinaccio utterly disgusting, while Italian-American chefs like Mario Batali have replaced the blood with chocolate. A few spots on Arthur Avenue, the heart of Little Italy in the Bronx still sell this peasant pudding in the months leading up to Easter.

Terrapins were the society meal in the Gilded Age, as was turtle soup. Because of the slow breeding cycle, turtles became endangered and eventually illegal to kill. Today a careful search through Chinatown’s side streets might lead you to a tub of live turtles in the back of a seafood market. Congee Village has turtle soup on the menu for a mere $4.95, a bargain when considering that during its hey-day, a turtle dinner could cost you the modern equivalent of $55.

Rice pudding is an old-school New York treat, mostly associated with diners, though it has also been given the highbrow treatment at Rice to Riches in Nolita. Though its history in the city seems to be most closely associated with German delis, rice pudding appears twice in The Epicurean, a treatise on food written in 1894 by Charles Ranhofer, the chef who made Delmonico’s famous. Anyone who has ever enjoyed a Dr. Brown’s Cel-Ray soda alongside a pastrami-on-rye at Katz’s probably wasn’t thinking much about his or her health. But celery tonic was indeed developed as a health drink. Dr. Brown was a doctor who treated immigrant children on the Lower East side, and in 1869, he combined seltzer with celery seeds and sugar and sold it as a tonic.

Unable to convince the FDA of its curative qualities, the company had to change its name to Cel-Ray, as which it can still be found in Jewish delis and specialty shops, mostly in New York and South Florida, where it may still affectionately be called “Jewish Champagne.” The can also boasts “Since 1869.”

Danielle Oteri is a writer, speaker, designer and art historian and founder of Feast on History. Get in touch with her via Twitter @feastonhistory.