The Jerome Park Racetrack, once described as the “national race course of America,” was a thoroughbred horse racing facility from 1866 until 1894 in that part of Westchester County that was annexed into the Bronx in 1874. There is nearly no trace of this once esteemed track that hosted the Belmont Stakes for over two decades. It and the land surrounding it became the site of the Jerome Park reservoir, but part of the reservoir was never built and became home to several educational institutions. A walk around the reservoir today brings you to several charming small parks and Revolutionary War fort sites. Jerome Park on race day, as pictured in Harper’s Weekly in 1886. Image from Library of Congress.

Financier Leonard W. Jerome (who was Winston Churchill‘s maternal grandfather; the “King of Wall Street;” and founder of the American Jockey Club, the most exclusive organization of its kind in the U.S.) and August Belmont, Sr. built a racetrack on 230 acres that Jerome bought from James Bathgate in 1866. The racetrack hosted the Belmont Stakes, the oldest Triple Crown race, from 1867 until 1889. The first U.S. outdoor polo match was held there in 1876. According to the New York Times, it was “one of the most famous and charming spots in America that has ever been devoted to the interest of sport” and “the nursery ground of the sport of thoroughbred racing” It featured a large dining room, magnificent ballroom, and clubhouse accommodations comparable to a luxury hotel. However, what began as an exclusive resort for the social elite, attracting the belles and social and financial powers of New York and the U.S., eventually degenerated into a money-making machine dominated by scandals and bookmakers that catered to the lower classes. The racetrack was accessible by both road and rail. Central Avenue, a plank road, was laid out in 1874 and connected what is now the Macomb’s Dam Bridge with the racetrack. It was paved and expanded into a tree-lined boulevard to be named after a city alderman. Jerome’s outraged widow paid for expensive bronze “Jerome Avenue” street signs and hired workers to install them. The Board of Aldermen relented, resulting in the officially named Jerome Avenue, at 5.6 miles, one of the longest streets in the Bronx. (Jerome Avenue becomes Central Park Avenue and then Central Avenue in current Westchester County and runs all the way to White Plains.) Leonard Jerome‘s one-mile Jerome Park Railway ran from 1880 to 1906. It was a spur beginning at the N.Y. & Harlem River Railroad just north of the present-day Mosholu Parkway bridge and ran to the racetrack station south of Burnside Avenue at the rear of the grandstand. The N.Y. Central Railroad operated racetrack shuttles and special trains from Grand Central Terminal. The 1879 rapid transit routes map shows the Jerome Park Railway crossing Central (now Jerome) Avenue. Parts of the railway’s route can still be seen today where several oddly shaped buildings were built along its right of way.

After the racetrack closed, the railway was used by the Jerome Park Reservoir contractor to haul away excavated material until 1906. The rail spur was extended four miles across the N.Y. & Harlem River Railroad tracks, through Bronx Park, and down Pelham Bay Parkway to the Meadows, tide lands formed by the head waters of Westchester Creek and Westchester Bay. A total of 3,200,000 cubic yards of sand, gravel, hardpan, and solid rock was dumped and filled in to a depth of 18 to 20 feet to turn the marsh into “valuable property.” In 1875 the Jerome Park Reservoir was first formally recommended by the Public Works Commissioner and was included in Frederick Law Olmsted’s 1877 streets and parks plan. The Croton Aqueduct Commissioners decided to build the storage and distributing reservoir in 1884.

New York City condemned and purchased the racetrack in 1895 for the reservoir that was completed in 1906. The Morris Park Racecourse (in the Morris Park neighborhood), built by John Albert Morris, the Louisiana “Lottery King,” replaced the Jerome Park Racetrack, where racing ended in 1894. Morris Park opened in 1889, with Leonard Jerome as president.

The Jerome Park Reservoir is a major component of the Croton Aqueduct system built on the Old and New Croton Aqueducts. Most of the Bronx and Yonkers were surveyed to find an appropriate site close to the same elevation as the aqueduct at the reservoir site. This avoided loss of the water’s hydraulic head (or pressure) or the construction of extremely high reservoir walls.

The site selected was a natural depression in a high ridge of land that was excavated for an artificial basin. It contains 94 acres of 25-feet deep water and its two mile circumference is surrounded by 30 acres of constructed and landscaped earth. It became and remains the largest body of water in the Bronx. The reservoir has massive elegantly crafted Roman-inspired walls and brick and stone WPA-era Art Deco gate house superstructures with stone voussoir (wedge-shaped) arches below. The walls tower more than 30 feet above the reservoir bottom but are only 8 or 10 feet above the surrounding ground level.

The reservoir was designed with four separate basins divided by north-south and east-west roads. With the later construction of the Catskill and Delaware Aqueducts, it did not need to be as large as originally planned. In 1911 the state legislature authorized the building of the Kingsbridge Armory on the southern part of the eastern basins. Although excavation of the eastern basins began in the early 1900s, they were filed in and graded in 1912 and two roads were eliminated.

Institutions on the unused portion of reservoir site 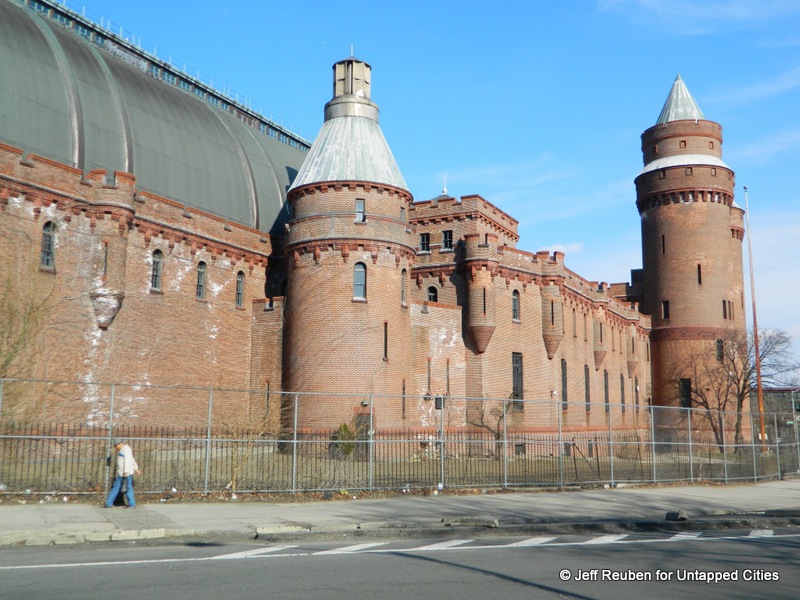 The Kingsbridge Armory, reputedly the world’s largest, was built in 1912-17 on the site of the Bathgate home that was razed in the early 1900s. It is considered among the city’s finest brick facades. The city offered it to the United Nations as a temporary meeting place. The military turned it over to city management in 1996 and it has not had a permanent use ever since. Various failed redevelopment proposals have included a school, athletic center, shopping mall, and homeless shelter. The latest proposal is for the world’s largest indoor ice rink. Lehman College was initially designed with nine collegiate Gothic buildings but only four were completed by 1934. During WWII its buildings were leased to the Navy to train 81,000 women volunteers for military service in the WAVES, becoming the main and largest women’s training site in the U.S. The U.N. held its first Security Council sessions in the gymnasium from March to August 1946. Lehman College sits directly behind reservoir walls.

DeWitt Clinton High School, opened in 1897 as the Boys High School in Greenwich Village, was renamed for New York governor DeWitt Clinton in 1900. It moved to Hell’s Kitchen in 1906 and then to the Bronx in 1929. With 12,000 students, it was said to be the largest high school in the world in 1934. (In 1935, an annex of DeWitt Clinton was located at the 1918 Evander Childs High School building at Creston Avenue and 184th Street and also served as the original home of Bronx Science in 1938 and then housed Walton High School in 1930.) DeWitt Clinton was the last gender-segregated public school in New York City until 1983. In 1999 US News and World Report named it as one of 96 outstanding schools in America.

The High Pumping Station on Jerome Avenue south of Mosholu Parkway South is an historic neo-Romanesque red brick building with a slate gable roof. It was built 1901-06 as part of the Jerome Park Reservoir complex. It was used to provide increased water pressure for tall buildings.

One of the more interesting proposed but unbuilt facilities was the “Museums of the Peaceful Arts.” In 1912 mineralogist and mineral collector George F. Kunz (in association with Thomas Edison, Nikola Tesla, Robert Peary, Jacob H. Schiff, and Henry E. Huntington) proposed twenty museums (including a stadium, library, and meeting rooms) devoted to industry and learning either in Riverside Park or near the Jerome Park Reservoir. Estimated to cost $20 to $25 million, they would be the largest museum complex in the world. Incorporated in 1914 with a $1 million bequest from engineer and head of the Yale Lock Manufacturing Company, Henry R Towne, to illustrate industrial progress, it began with a few exhibits at 24 West 40th St. in about 1920. The reservoir area was the site of several Revolutionary War forts and is now the site of four parks. Jerome Park, along the north and northeast sides of the reservoir, was opened as a park in 1940. Fort Independence Playground, at the northwest corner of the reservoir, came under Parks Department jurisdiction in 1915. It has a plaque commemorating Fort Independence that was located nearby. Its elevated site gave an extensive view of the surrounding countryside. Historic markers describe the Revolutionary War and transformation of the land since then.

Washington’s Walk, along the southern side of the reservoir, was a defensive palisaded earthwork redoubt atop a schist outcrop. Old Fort Four Park, at the southwest corner of the reservoir, was the largest fortification in the area. It also had an extensive view and is now marked by a flagstaff and bronze tablet. A playground opened in 1934.

The story of the Jerome Park Racetrack, its rise, fall and rebirth as a reservoir and site for institutional buildings, tells the story of a certain point in time in Bronx’s history (and the city as a whole). The Bronx shifted from a land of Gilded Age estates, where the upper crust of American society would gather for leisure activities like horse racing and the racetrack was taken over to provide essential services for a growing city that had a need for clean water, outdoor space, and educational institutions.

Get in touch with the author at [email protected]. Next, check out the 5 tallest buildings in the Bronx.