Our friends at the Museum of the City of New York are celebrating Black History Month with a slew of events, beginning on February 6 with “Black Is Beautiful”: Fashion and Consciousness, a talk between documentary photographer Kwame Brathwaite, his son Kwame S. Brathwaite, historian Tanisha Ford and designer Mimi Plange.

Following this event, MCNY is hosting “The Black Experience,” where visitors can hear stories of free and enslaved Africans in early New Amsterdam as well as Black communities like Seneca Village (more on that below). “King in New York,” an exhibition about Dr. Martin Luther King Jr., is also on view until June 1.

10. Fight the Power: Black Superheroes on Film at BAM Head to the Brooklyn Academy of Music for its next film series, Fight the Power: Black Superheroes on Film, presenting the cinematic history of black screen heroes. The event will run from February 2 to 18, with featured films like Blade I and Blade 2 – Bloodhunt

and Night of the Living Dead.

See the full line up here. While you’re at BAM, make sure to check out some of its other world-renowned programming, spanning theater, dance, music, opera and film. 8. “Black in Brooklyn” Presented by Green-Wood

Taking place on Saturday February 17, from 11am to 1pm, “Black in Brooklyn” is a Black History Month celebration that sheds light on the unique stories of black lives in Green-Wood. Hear about the accomplishments of black New Yorkers and abolitionists while on a special trolley tour, led by Green-Wood historian, Jeff Richman.

During the trip, you’ll have the opportunity to visit the monuments of Susan Smith McKinney Steward, the first black female doctor in the state, artist Jean-Michel Basquiat and Jeremiah Hamilton, New York’s first black millionaire, among others. Green-Wood Cemetery is located at 500 25th Street in Brooklyn.

7. Learn About The Seneca Village Project in Central Park

Central Park was once home to a thriving village made up mostly of African-Americans. Named Seneca Village, it was a middle-class town with “three churches, wood houses on assigned lots, a natural spring, basement schools, and a population of over 260.” It was a place where black residents owned their own land. In 1853, the city authorized the take-over of the land, and paid the settlers off. By 1857, when Central Park was officially opened, the settlement was gone.

To learn more about Seneca Village, make sure to join us for our tour of the Secrets of Central Park, where we will learn more juicy secrets about New York City’s beloved green space.

The Louis Armstrong House and Museum is a place where visitors can have an intimate look at the man himself. This was the place he returned to, in between a year of about 300 concerts. The house, which was decorated by  Armstrong’s wife, Lucille, has changed very little over the years. Now a museum, it holds several collections of photographs, sound recordings, letters and instruments. It is, in fact, the largest publicly held archival collection devoted to a jazz musician.

The Louis Armstrong House Museum was designated a National Historic Landmark in 1976, and a New York City Landmark in 1988. After the passing of Lucille Armstrong in 1983, the Louis Armstrong Educational Foundation gave the house to the Department of Cultural Affairs, arranged for Queens College to operate it, and gifted Armstrong’s personal collection to Queens College. The museum opened to the public in 2003. The Louis Armstrong House Museum is located at 34-56 107th Street in Corona, Queens. Check their website for guided 40-minute tours. Also, check out our previous coverage of the museum here.

There are plenty of events taking place at the Brooklyn Museum for Black History Month. If you’re in the mood for some music, pianist and soul singer Aaron Abernathy will perform his gospel, funk and Civil Rights Movement-inspired jams at 5pm.

Then at 6pm, there will be a screening of Whose Streets?, which documents the movement that followed the killing of 18-year-old Michael Brown in Ferguson, Missouri. This will be followed by a conversation with director Sabaah Folayan and Elizabeth Rodriguez, senior member of our Teen Night Planning Committee. Also at 6pm, is a talk about The Black Joy Project with Bronx-based writer, activist and founder, Kleaver Cruz.

Finally, if you still have enough juice in you, join the Brooklyn Dance Festival from 7:30pm to 9:30pm, where performances and workshops will take place. More information on all of these events here.

4. Take a Tour with Welcome to Harlem 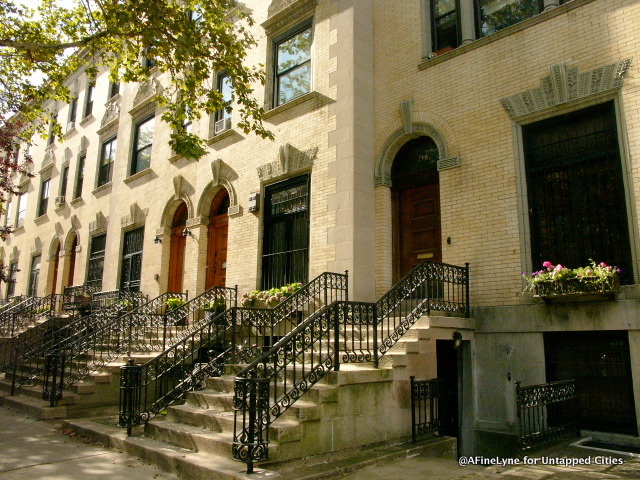 Welcome to Harlem Tours has been located at 2360 Frederick Douglass Boulevard since 2004. The owner and tour guides were all born and raised in Harlem, and offer a plethora of information on their daily walking tours through the historic district, with its elegant rows of brownstones, and historic churches. They will take you to iconic jazz clubs, or private haunts reminiscent of the 1920s Rent Parties.

Attend gospel choirs, and visit African art galleries, markets and shops. Explore the architecture on historic streets like Strivers Row and Astor Row. Visit the historic murals, graffiti, and mosaics. There are lots of tours to choose from during Black History Month.

B.B. King Blues Club will host the world-famous Harlem Gospel Choir for a Gospel Brunch five times in the month of February. The choir was founded in 1986 by Allen Bailey, after he attended a celebration in honor of Dr. Martin Luther King, Jr. at the Cotton Club in Harlem.

He was so inspired by the music, that he went in search of  the finest singers and musicians in Harlem’s Black Churches. The Harlem Gospel Choir performs regularly at B.B. Kings, and during Black History Month, there will be a Harlem Gospel Brunch Buffet on February 4, 10, 11. 18, 25th. B.B. King Blues Club is located at 237 West 42nd Street.

The Harlem Fine Arts Show is the largest traveling African Diaspora art show in the United States, exhibiting in Atlanta, Martha’s Vineyard, Washington D.C., the Bahamas, and in February, New York. The exhibit celebrates art of the African Diaspora, inspired by the Harlem Renaissance, and offers a platform for African-American visual artists to exhibit and sell their artwork.

The Harlem Fine Arts Show will be one view from February 15-18 in the historic Riverside Church, 91 Claremont Avenue, between 120th and 121st Streets. Check website for related events, including Gospel Brunch on Sunday, February 18, with a salute to African-American Nurses.

The Schomburg Center for Research in Black Culture has a host of activities, films, and talks during Black History Month, beginning with “Conversations in Black Freedom Studies: Black Resistance to Trump Tyranny” on February 1. There’s also a Black Lives Matter Teen Conference, a music concert and a film screening.

Of course, this is just a sampling of what’s on tap at the Schomburg Center. Check out other related events here. The Schomburg Center for Research in Black Culture, a research unit of the New York Public Library, is located at 515 Malcolm X Boulevard (Lenox Avenue) at 135th Street.

Read about the Harlem African Burial Ground Memorial Project and check out our neighborhood guide of Must Visit Places in Harlem and East Harlem.